Reading Excel Files Without Saving To Disk In ASP.NET

This article allows me the opportunity to demonstrate a feature of my newest favourite open source library: EPPlus. EPPlus is a .net library that reads and writes Excel 2007+ files using the Open Office Xml format (xlsx). This fantastic, easy to use (and free) library enables the use of Excel in ASP.NET applications without the need to install the Access Database Engine (ACE) or having to mess about with unsupported Office Automation on the web server (assuming you can even get Office installed there). Prompted by a rash of similar questions that appeared on the ASP.NET forums recently, this article looks at reading the contents of an uploaded Excel file without saving it, and displaying the data in a Web Forms GridView.

This first thing to do is to add EPPlus to your application. I have linked to the project site where downloads are available, but the recommended way to add this kind of library to your project is via Nuget - if the library is hosted there, and this one is. It can be added to your site by typing

into the Package Manager Console.

The following section of code is a simple .aspx file that includes a file upload control, button and GridView:

The button has a click event handler wired up to it. Here is the code for it along with the rest of the code behind file contents:

The things of note here start with the using directive at the top of the file, making the OfficeOpenXml namespace, which contains most of the EPPlus features, available to the code-behind. The button click event handler code checks to see if a file was uploaded and if it has the correct extension. An ExcelPackage instance is created from the upload's FileContent property, which is a Stream. This is subjected to an extension method (ToDataTable) that returns a DataTable and then used as the datasource for a GridView. Finally, DataBind is called and the content is displayed in the browser. 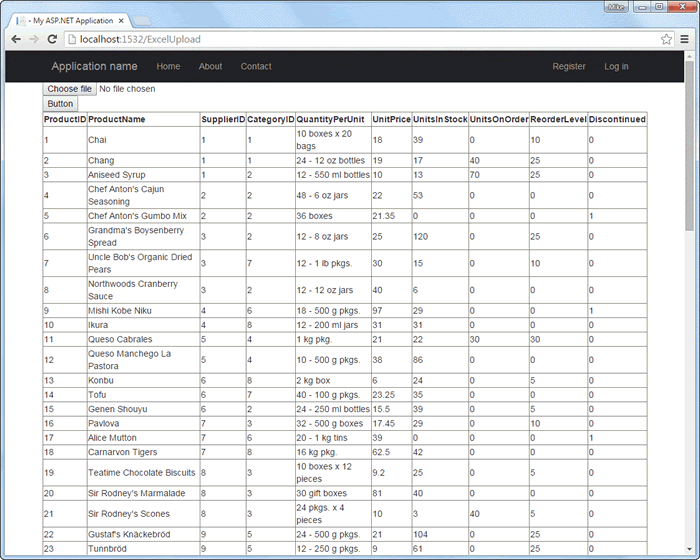 At no point during the process is the uploaded file saved to disk. The extension method accesses the first worksheet and loops through its contents, adding rows to a DataTable as it goes. This then returned from the method. The code in the method doesn't include any kind of error checking to keep things simple. For example, you would obviously want to check that the Worksheets collection isn't empty before you use the First method on it. The method also assumes that the worksheet has a header row. The for loop starts with the second row when copying data to the DataTable.

This short article shows how to use the free EPPlus library to read the contents of an uploaded Excel 2007+ file without saving it to disk first. EPPlus is a very powerful tool and I shall explore some more of its capabilities in future articles.

fast_rewind Entity Framework Recipe: Many To Many Relationship On The Same Table A Better Way To Export Gridviews To Excel fast_forward