This article builds on the simple paging functionality that was added to a Razor Pages application in my last article by showing how to add sorting functionality so that the user can determine the order in which results are displayed.

Most sorting examples show how to pass the column header to C# code that uses a switch statement to build a LINQ query:

This works but it suffers from 3 limitations:

A really neat solution to this is the Dynamic Linq library. It provides extension methods such as OrderBy that take string arguments instead of type-safe expressions. It means that I don't have to know the shape of the model that the OrderBy method acts upon at design time. It is evaluated dynamically at runtime. This was originally released by Microsoft, but not as part of the .NET Framework. It has since been ported to .NET Core by a few people, one example of which can be found here: https://github.com/StefH/System.Linq.Dynamic.Core. I can install it using Nuget:

Or I can use the command line:

Once it is available to the application, I add another method to the PersonService from the previous article. Here it is again in its entirety with its interface:

One other change to note - I removed the default value for the CurrentPage property. I am going to move that to the page's route template instead, and add another parameter for sortby:

The only thing left to do now is to add column headers to the table with hyperlinks to specify the sort order, and to adjust the paging links. Here is the revised content page:

The thead element contains the column headers with the links. The links themselves are generated by anchor tag helpers. Each one has an asp-route-sortby attribute set to the value of the respective column. This will ensure that the correct value is provded to the RouteData dictionary, from where it will be bound to the SortBy property in the PageModel. The value for the currentpage parameter will be supplied from ambient route values. 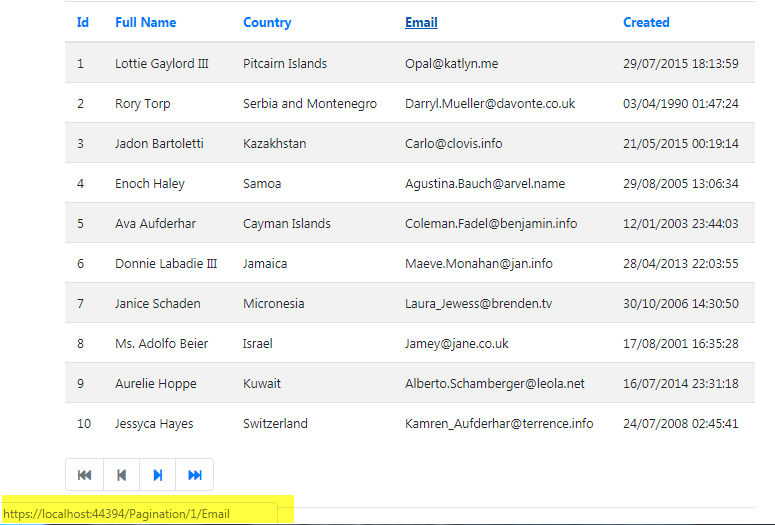 Now when you click one of the sorting links, the paging links also include the sorting information:

A lot of people automatically reach for third party components when they want to add paging and sorting to a table of data, but this article and the one before it show that implementing these features is not complicated at all. Dynamic Linq makes adding generic sorting functionality a relatively pain-free process.